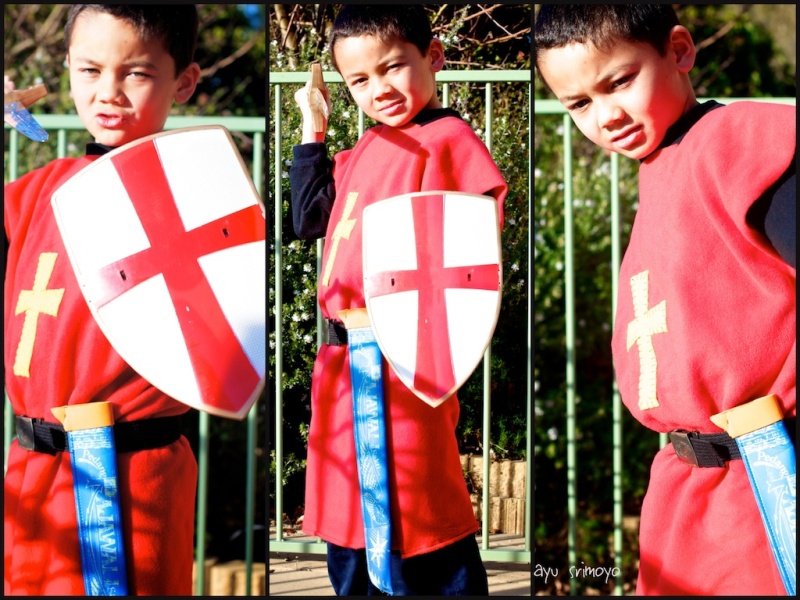 Even though I always whinge about it, I actually love the annual book-week parade at my kid’s school. It’s always a good fun in the morning to see all these little characters parading around. Some costumes were fabulous, some were funny, and some just did not even try, or just forgot/or the parents didn’t have time to dress them up. It also became a bit unclear sometimes where they picked their characters from. A book? A movie? TV series? Either way, it’s always nice to be at the school to watch all the commotion and be surrounded by the little happy faces in their chosen characters.

Hubby has been reading Mr 8 a book from a series (in Dutch) that he loved when he was a kid called De Rode Ridders this past week, so it’s only natural that this became the book that Mr 8 chose to pick his character from. The interesting part about dressing up as your character from the book was to see whether people could actually guess who you were and what book the character from. Since his character was not even from an English book we knew nobody could correctly guess who his character was (this red knight -I wasn’t even sure what his name was- was one of the crusaders ‘back in the days’). But they all guessed he was a knight of some sort, which was great. He laughed gleefully when someone guessed that he was a knight in shining armor.

All my effort paid off. Mr 8 was happy and loving his new costume. Unlike his ‘fragile’ Gandalf costume from last year, this costume is a welcome addition to his collections of capes, cloaks, and super hero costumes because it’s so much more sturdier and more comfortable.

I am just happy because he’s happy. 🙂

The look from the back. Don’t judge me on my stitching… 😉